The Draw of Deer Hunting with a Bow 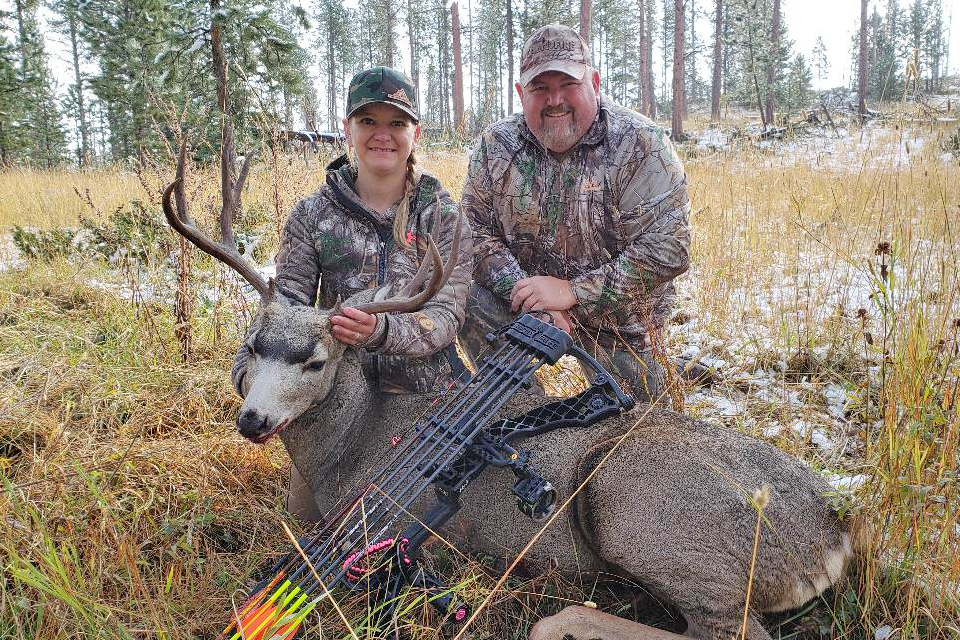 Sometimes when you least expect something to happen is, well… when it will actually happen. At least that was my experience when harvesting my first archery animal. But for you to fully understand the story, I’ll need to start from the beginning.

I started hunting almost 20 years ago. My husband was the one who introduced me to the sport. Growing up just outside of Tampa, Florida and being raised by a single mother, I didn’t have many opportunities for hunting, but I loved the outdoors and enjoyed watching wildlife. I was never the type of person to just sit around. Hunting was a great way for my husband and me to spend time together. I love being in the outdoors, and for us, it seemed to be the perfect fit.

A few years later, I was driving home from work when someone ran a red light and hit me hard. My right arm was seriously damaged in the accident. It took two elbow surgeries and several years of healing to finally feel like I had my strength back in my arm. By this time, my husband and I had started a family, and God had blessed us with twins. Like any children, they didn’t listen and came into this world way too early. Our lives revolved around them, but as the years passed, I slowly began to hunt again with my husband. I was even lucky enough to get a state park tag that only 10 hunters get per year!

Including our children as much as we could when we went hunting has always been important to me and my husband. Our kids loved being in the outdoors just as much as we did. As interest in hunting grew in my state, and hunting tags changed, it became harder and harder to get a deer tag. Living in an area full of wildlife and not receiving a hunting tag every year, I knew something had to change. And I had to challenge myself to try something new.

My husband had recently upgraded his bow, and he asked me if I wanted to try shooting his old one. I had never really thought I could pull a bow back after hurting my arm in that car accident. I had always used that as an excuse but never gave myself a chance to actually try it out. I really enjoyed the sport of archery and watching my husband shoot but never thought it was something I could do.

After the very first arrow, I was hooked! I started out slow and missed the bullseye a lot, but I enjoyed just getting out and going shooting. It was so much fun! With the help of my husband and lots of practice, I slowly began to get better at it. The only problem was his old bow was heavy, and if I ever wanted to try archery hunting, I was going to have to find something lighter. After some research, I purchased a Mathews Heli-M and loved it! I immediately began shooting better and keeping much tighter groups on my target.

The following year, I decided to get an archery hunting license for a deer. In my state, you can receive an archery tag each year—allowing me to hunt every season in an area close to home and my kids. Once again, with the help of my husband, we put up my first tree stand. I was absolutely blown away by how much more of the deer’s behavior I was able to witness in the stand. I had never heard a doe make so many sounds before. I had never seen a buck scrape and rub a tree before or chase a doe around. I even had a deer walk right under my stand! That year in the stand was full of firsts—but not my first deer. And I was okay with that. I learned so much about deer that first season that it felt like it was a win for me.

Through the summer, I continued to practice as much as I could, and I even joined a local archery shooting league. So by the time archery deer season came around the second year, I felt I was ready. We moved my tree stand that hunting season in hopes of being closer to the deer. I saw lots of animals, but for some reason, nothing seemed to line up for me. I had two opportunities to harvest a deer from my tree stand, and both times, I missed. That didn’t happen just when I was archery hunting—I had missed on some very easy rifle shots at some nice bucks as well. It just wasn’t my year.

Hunting isn’t just about shooting something. I was able to take my kids with me. And I spent a lot of time hunting together with my husband. That same year, my son harvested his first deer with his dad. I can still remember the phone call from my son as I was getting out of my tree stand that evening and the excitement in his voice when he said to me “Mom, I shot my deer!” But as much as I was ecstatic for my son, I felt a little disheartened that I couldn’t share his success. I wanted nothing more than to have harvested a deer with my bow, but once again, I took it as a learning experience. 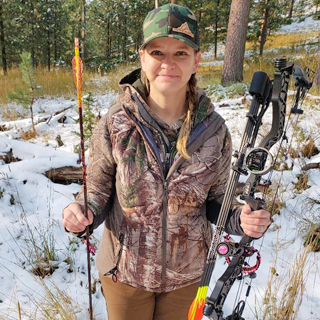 The following summer, I really tried to import what I had learned in those past hunting seasons. Extending my yardage, I was shooting and keeping my bow setup just like I had it during hunting season. Another big change was that this year, my state GFP opened archery deer season three weeks earlier than in years past, putting me in the tree stand that much earlier. After a few weeks of hunting and only seeing deer on the other side of the valley, we decided to put up a new stand. So once again, with the help of my amazing husband, our two kids spent a Friday afternoon putting up a new stand for me while I was at work. That next day, we had already planned to go up in the hills hunting with a friend, so I would have to wait on sitting in my new stand until that weekend.

On Saturday morning, we hit the road to meet our friend. But I forgot one of the most important items—my bow. Luckily, my hubby loves me and is very patient with me, so we drove back to get it. As we arrived in the area in which we wanted to hunt, it was socked in with fog. Not really being able to see that much, we decided to continue on to some other areas. Finally, the fog started to lift, and the deer were moving. Spotting a smaller 2×2 mule deer, my husband and I worked on trying to get me closer to the deer, but we were never able to get any closer than 65 yards. Not feeling comfortable enough to take a shot from that distance, we carried on in hopes of seeing more animals. At that point, I had spent almost three years trying to arrow a deer, so I wasn’t really concerned about the horn size.

As we came around a bend in the road, our friend that was with us whispered, “Deer… nice deer.” My husband and I slowly began to inch closer to him. It had snowed the night before, and it was falling off the trees above, making just enough noise to cover the sound of us creeping towards our prey. Keeping a tree or two between us and the deer, we got closer and closer. Finally, as we got to the last tree, my husband ranged the deer, and I removed an arrow from my quiver. My husband said to me in the calmest voice, “He’s at 50 yards. Pull your bow back, take a step out from the tree, hold your 50-yard pin on him, and let it go.” As I began to step out, I saw there were some small branches in front of the deer. I whispered to my husband, “I can’t… because of the branches.” He said “Don’t worry, you’ll clear them.” So I did just what he said. I lined up my pin and let the arrow fly. Watching in utter disbelief, the arrow hit the mark, and the buck made that famous heart kick. I just stood there with my arms still extended, bow in hand. I muttered to myself, “Now don’t get too excited. It’s archery, and sometimes, things just don’t go as you think they should.”

I turned quickly to my husband and made eye contact with him. By the look in his eyes, I knew I had made the shot. I could also hear our friend excitedly exclaim, “You got him!” I turned quickly back to the buck, watching as he walked a little way and then slowly lay down. Could this be it? Did I just shoot my first archery deer?

After watching the deer lay down, our friend came up to where my husband and I were standing. We decided my husband would keep an eye on where the deer was to make sure he didn’t get up, and our friend and I would go look for the arrow and for blood. After a short search, we found the arrow covered in blood. There was no question that I hit him, so we waited a short bit and then went to get the deer. As I walked up to the buck, all I could think about was the hours my family had just spent on putting my new stand up the day before—and that I would never sit in this year. But shortly after putting my hand on my very first archery deer, all that faded. I was overcome with joy and respect for the deer.

After three years, hundreds of hours sitting in the stand, and a few misses, I had finally accomplished what I had set out to do: harvest my first animal with a bow. The best part is I had my biggest supporter, my husband, by my side.

Sometimes when you least expect it, great things will happen. Just remember to keep trying and never give up!

~By Kelly McIntosh
Website | Facebook | Instagram
Kelly McIntosh was born in the Bronx, New York but grew up on the sandy beaches of Ozona, Florida. With two older brothers, Kelly was a bit of a tomboy, always playing in the sand or mud, climbing trees, or fishing off the pier. In her younger years, she didn’t have many opportunities to learn how to hunt or shoot; however, she loved to take pictures of wildlife. In high school, Kelly’s love for photography grew, and it was rare to see her without her camera. Shortly after moving to South Dakota, Kelly met her future husband, who became her biggest hunting influence. Kelly is now an avid archer, a passion that her whole family shares. She also participates in several organizations that encourage children to get outdoors. Kelly loves sharing her knowledge and passion with the younger generation. 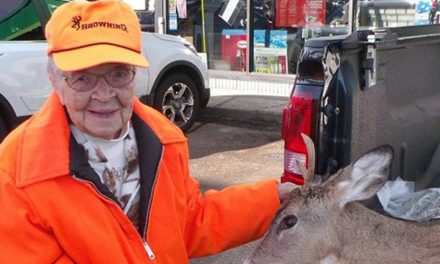 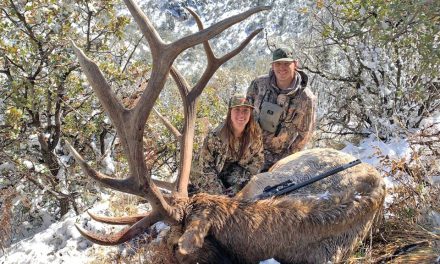 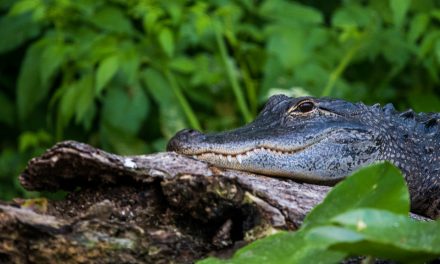 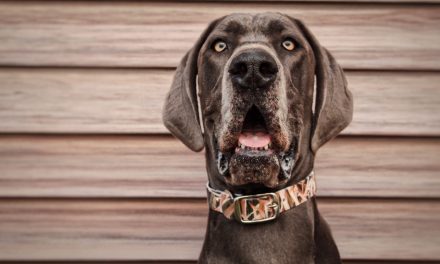